Extract from In a Town Called Paradox 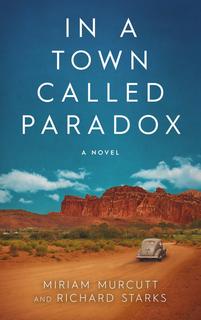 Corin Dunbar, the central character, relates this scene. She is going out with Cal Parker, a deputy sheriff (and local heart throb). His father, Dale, is the sheriff, and his father (Cal's grandfather), Tommas, was the sheriff before him. Law enforcement runs in the Parker family. Jessie is Corin's aunt.

When our second Thanksgiving rolled around, I agreed, with Jessie's blessing, to cook Cal dinner—and Dale and Tommas too. I arrived early at their house at Sixth and Adams with a turkey, raw and stuffed, ready for the oven. Riding beside me was a pumpkin pie Jessie had baked and that I only had to reheat, as well as a bag of potatoes and carrots I had pulled from our kitchen garden. Two cruisers, a Bronco, and a trailer were slanted across the Parker front yard, which was little more than a scratch-patch of sun-browned grass.

Dale opened the door. I'd met him before, of course, but only on the street when he was on duty. Cal had never invited me into his home.

Tommas was on the back porch, swathed in a blanket and the acrid fumes of a paraffin stove. As with Dale, I'd only ever seen him in town, sticking his way along Main. He was slumped in a wicker chair, his back curved like a crescent moon. His palm felt rough when I shook it, his fingers spindles as dry as kindling. His eyes—flecked with gray like Cal's under a pair of caterpillar brows—were alert and alive, and only mildly skimmed with cataracts.

"Fetch your girl a beer, Cal," Dale said. "Don't just stand there like a dime-store dummy. Show her some manners, won't you?"

Dale sank into a chair amid cumulus clouds of stuffing that billowed out of its cushions. He didn't have Cal's physique. He was tall and straight, but lacked his son's bulk of muscle. And his face was etched with deep lines carved into his cheeks.

Cal followed me through. He was dressed in Levi's and boots, with a crisp new red-checked shirt. He gave my shoulder a squeeze in place of a kiss, showed me the crate in the larder that held the pots and pans, then left me to it.

I thought the turkey would never cook, and it took me an age to peel the potatoes and carrots. The men stayed on the porch, but twice Tommas shuffled into the kitchen to use the bathroom next door. I tried to block out the tinkle of pee that came in sudden stops and long hold-your-breath starts. My plan was to eat at the dining room table, so after removing a bowl of sand with cigarette butts poking out of it like worms coming up for air, I set up everything there; but Dale called through from the porch—"We eat in the kitchen"—so I schlepped everything back again.

Dale carved while I handed round the trimmings—cranberry sauce, gravy and stuffing, and a sweet-potato pie I'd topped with marshmallows—and then we dug in. Tommas sank several cans of Miller from a cooler he kept on the floor beside him. Cal kept pace. But Dale confined himself to a few sips of Dr. Pepper. No one spoke beyond a grunt. They attacked their plates with heads down, elbows out.

We'd finished the pumpkin pie Jessie had baked when Dale scraped back his chair, rose to his feet, and raised his can of Dr. Pepper.

"Corin," he said, "that's as fine a meal as I've ever tasted, and I want to thank you for it. It makes it a pleasure to welcome you into the Parker family."

I looked across at Cal, wondering what he'd been saying about me. He kept his head down and dolloped a scoop of ice cream onto another slice of pie.

"I have just one request," Dale said. "Make sure my first grandkid's a boy. We don't breed girls, do we, Tommas?"

"Only boys," Tommas agreed. "Parkers don't shoot blanks." He leaned to one side and squirted a gob of tobacco and mucus into an empty paint can next to his cooler.

"We need boys," Dale went on, "to grow into lawmen who'll wear the star. Just like his daddy does. His granddaddy—and his great-granddaddy too. Ain't that right, Tommas?"

"Fourth generation sheriff," Tommas said. "I'm holding on for that."

I waited for Cal to speak, to tell Dale he was out of line. We'd never spoken of marriage, and I wasn't just a baby-making machine. Cal's color did rise, but he kept his head down and spooned up more ice cream and pie.

I realized then his view of the future didn't sync with mine. I didn't yet know what I wanted from life. But I did know I wanted more.

You can read here about some of the people who helped make movies in Utah during the 1950s and 1960s - part of our research for In A Town Called Paradox.